The day was beautiful; the breeze was warm and the birds were singing in the trees. Pretty flowers adorned the thick green grass, and stuff was generally wonderful. Oh, wonderful stuff: the height of summer! It was minutes before the middle of the day and my walk to work was beautiful; the slight breeze caressed my neck and my open fingers swam through the warm summer air. Of course, when I got to work, the general horror of being trapped in a windowless metal container with hordes of sweaty customers for hours would soon snatch this summer romance from my hands and crush it into tiny pieces… but for now, I was alive, and it was summer. My head was a bit itchy, but I was putting that down to cheap hairspray. But other than that, I was strolling along, without a care in the world. Beautiful!

I had my earphones in and Amanda Palmer was recounting a short history of nearly nothing when a white van drove the road alongside me and slowed to a crawl a few paces ahead. A man shoved his head out of the window: he was bald and somewhat fat. Perspiration was not his friend. Though his face was obscured slightly by the rolls of fat that were trying to submerge his eyeballs, I realised that he was looking directly at me, his steely gaze unhindered by the bright sunlight. Though I was surrounded by the loving embrace of the summer warmth, a sharp pang of dread made its way into my heart. Not a this is actually quite creepy pang, more of a what the fuck does he want? sort of pang. The kind of pang that makes you want to set fire to his van and dance gleefully amongst the burning embers. You know the sort.

I had come to the conclusion that ignorance of this van-head-poking gargantuan would be the best method to ensure the continuation of summer loveliness. Too might I have succeeded with this endeavour had the man not began to flail about. I couldn’t help but stare: the man was gesturing wildly, his fat arms flapping above his head like a lonely sock caught in a tumble dryer. He was yelling something too, but my interest in his behaviour hadn’t extended to the point where I was willing to remove my earphones. Instead it was like I was watching a walrus in a t-shirt dancing to punk cabaret. A sight to behold.

But then he did a gesture recognisable over any background music: it was ‘this big’. He was telling me that it was ‘this big’, ‘THIS BIG’. My mouth gawped open slightly. I didn’t give a fuck about how big it was or what he was trying to get me to do with it! All I knew was that I wanted him to go away now so I could try and claw back some of my summer day he had ran over with his van. Taking a deep breath I gestured back: another gesture recognisable over anything- the middle finger. Strong and solitary. The world renowned gtfo. The man stared at it for some moments more, then calmly retracted his head back into the van, and quickly sped away. Satisfied, I smiled to myself. ‘I’ll give you this big’, I thought, ‘Try and ruin my day with your penis? I’ll give you this big!’

I finished walking to work. People stared at me as I ascended the stairs to the locker room- it must have been my smug sense of self-worth that they were admiring. I put my bag in the locker and took a confident walk up to the mirrors, swaying as I went. I smoothed down my eyebrows as I sauntered over, my jerk-like demeanour richly deserved on this glorious and vengeful summer day.

Heh. This big? I’ll give you this big. Arsehole. I went to take a look in the mirror…

… but then I saw it. A monkey. On my back. Trying to eat my head. It was using its leathery hands to cling on to my shoulders whilst its hairy face was munching nonchalantly on my skull. I wasn’t even sure what to do with it… probably because it had eaten some of my brain. It must have been there for hours. And it was this big, I tell you, THIS BIG!

This site uses Akismet to reduce spam. Learn how your comment data is processed.

Good evening reader, welcome to the Insanity Aquarium. Sometimes my name is Anna, and I’m pleased to meet you. I irregularly write darkly humorous horror-based flash fiction stories, and I do so hope you enjoy. 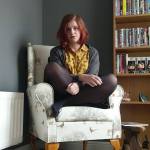